When my stepdaughter and Dialogue colleague Jen Datka requested a career break to thru-hike the John Muir Trail back in 2019, my first thought was, “You can do that?”

Meaning hiking 200+ miles AND taking an extended break from work.

In truth, the latter was more startling. I had long indulged what I thought was a pipe dream of hiking the Appalachian Trail, so I knew people did things like that.

But I never considered an extended break from work. Heck, I've barely taken a full week off from work since starting my agency 21 years ago this month.

I thought the more time I spent at my desk, the better business owner I would be.

Spoiler alert: I was wrong.

It’s hard now to admit how far I let my self-care go. Even worse than the self-care was the self-talk, a near-endless loop of negativity. I always felt like if I just worked a little smarter or a little harder...if I just weighed a little less..if I just insert-your-self-loathing-here…

I know I’m not the only one who thinks that way, which is why I'm sharing my story. It's a story about getting healthier in both mind and body. It's a story that has an urgency for those of us with depression and related mood disorders. I lost my Mom to depression so I knew the risks of the road I was on.

I just didn’t know how to get on a better road.

Until Jen suggested that a better road might just be a trail.

Suddenly a lifelong distant dream could be reality. I was all in!

Starting on our local mountain park trails, I had to pause to catch my breath about every 10 steps. At that rate, I wasn’t going to finish a mile before dark, let alone 2,200 miles of the Appalachian Trail.

Before I could get discouraged, I put my intention out there to the universe with a picture Jen and I took on one of those early hikes: 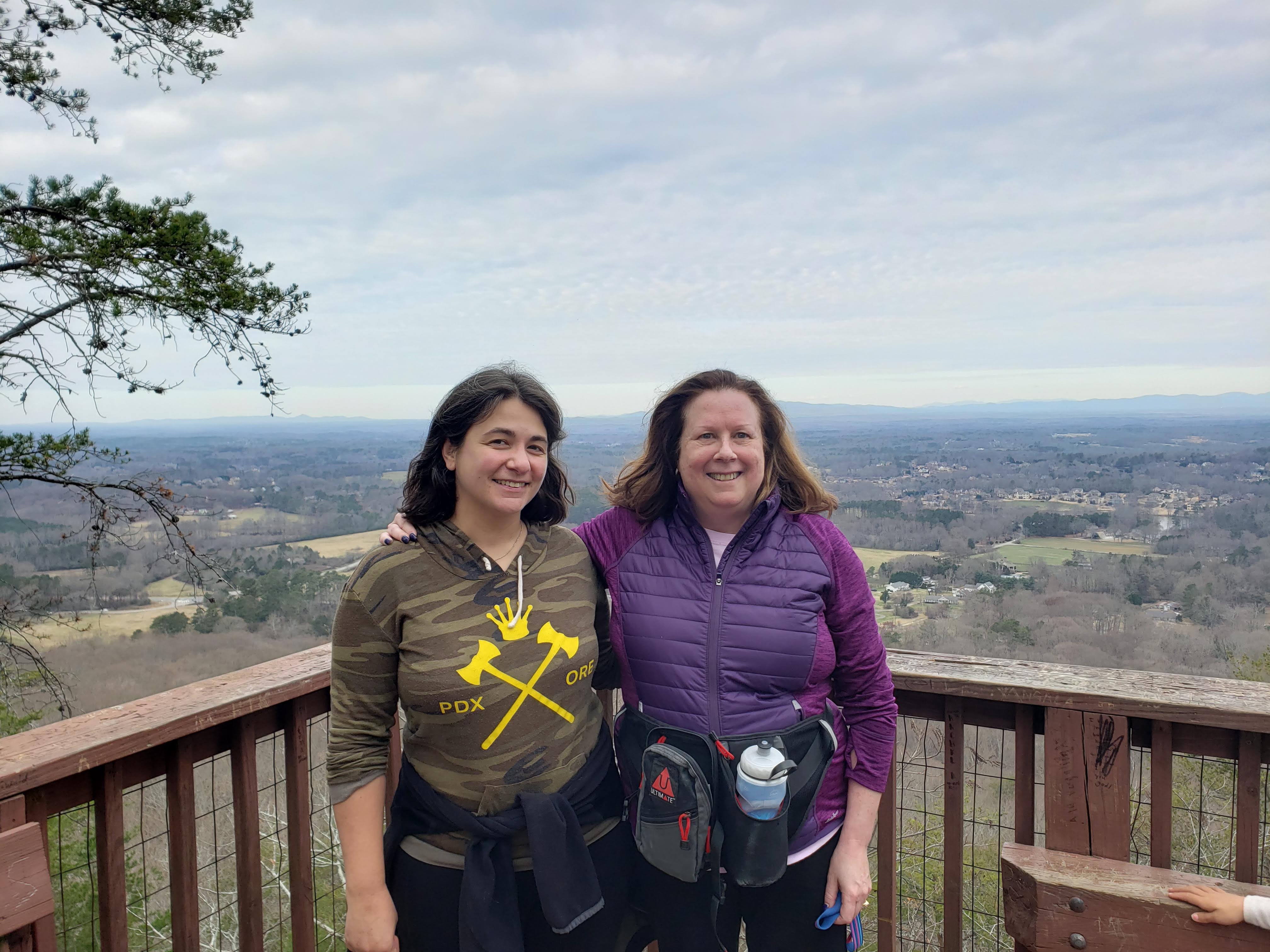 Going into it, I hoped I'd improve my fitness. But I did not expect such a dramatic mental shift: tangible behavioral changes and new habits that have stuck now for 12+ months.

Who knew a walk in the woods could do all that? Apparently, some people did.

What Science Tells Us About the Mental Health Benefits of Hiking 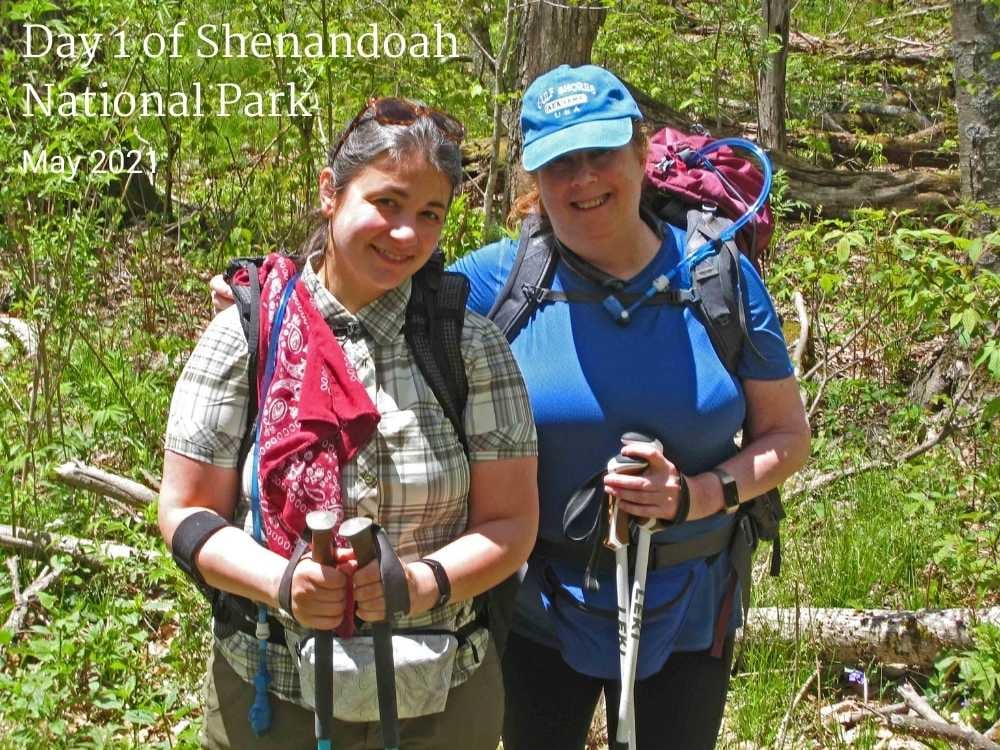 Between Christmas 2019 and New Years 2020, I decided to hike every single day, documenting it on my Instagram because I like to live my life out loud.

Jen noted in her thru-hike article that hiking clears her head and improves her ability to concentrate, but I didn’t know there was science behind it.

The Appalachian Trail itself evolved from a mental illness tragedy. Another suicide survivor, forester Benton MacKaye, published his vision for the trail in the October 1921 issue of the American Institute of Architects’ AIA Journal following his wife’s suicide earlier that year. His words sounded like something a modern-day wellness expert might write:

"Something has been going on these past few strenuous years which, in the din of war and general upheaval, has been somewhat lost from the public mind. It is the slow quiet development of the recreational camp. It is something neither urban nor rural. It escapes the hecticness of the one, and the loneliness of the other. And it escapes also the common curse of both - the high powered tension of the economic scramble.”

For the record, I love the high powered tension of the economic scramble. I thrive on it. I’ve loved my life in my business.

But I undervalued the need for breaks. And I flat out had no idea that dedicating some of those breaks to time spent in nature could have such a profound impact.

Jen noted that hiking in the woods is not the same as a relaxing vacation. Coping with nature directly requires intense focus to stay safe. Turns out that nothing snaps me out of a negative self-talk loop like knowing that lack of said focus can actually kill me.

It also turns out that the mental shift lasts long after leaving the trail.

Mental and Behavioral Changes From the Trail 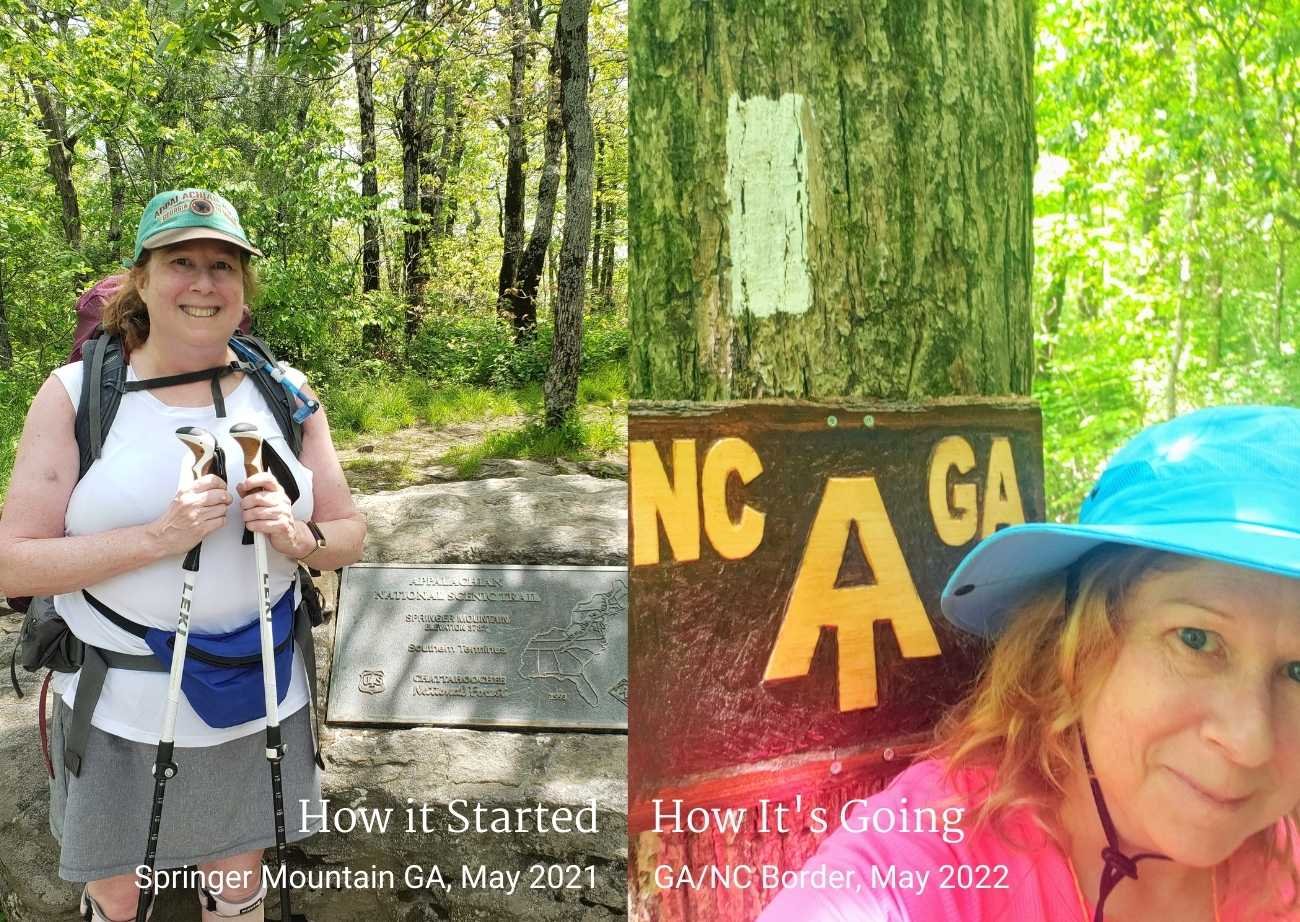 Shutting off the negative self-talk loop to survive on the trail shifts me into problem-solving mode.  I am really effective at problem-solving when I can focus. Exchanging the self-critical inner voice for a more nurturing coach inside my head enables me to have that focus.

Once I made that shift on the trail, I could replicate it back home. I became better organized. I started making better food choices and committing to daily exercise. These are lifestyle changes I’ve sought to make for 30 or more years.

As I write this, I’ve completed 115 miles on the Appalachian Trail in one year. After the aforementioned Shenandoah journey, it’s been mostly day hikes from my home in North Georgia.  On Memorial Day weekend of 2022, I finished the last five miles of the AT in Georgia, so now it’s on to North Carolina and points north. I hope to finish the whole thing in longer sections over time.

I once wrote about the need for businesses to give longer time off for bereavement. Now I believe we business leaders need to prioritize longer time off in general. That means staffing generously and encouraging career breaks and sabbaticals.

I also believe that some vacations need to be for fun and relaxation, while others should be dedicated to extensive time in nature.

"Let's put up now to the wise and trained observer the particular question before us. What are the possibilities in the new approach to the problem of living? ...Two weeks spent in the real open - right now, this year and next ... Life for two weeks on the mountain top would show up many things about life during the other fifty weeks down below." 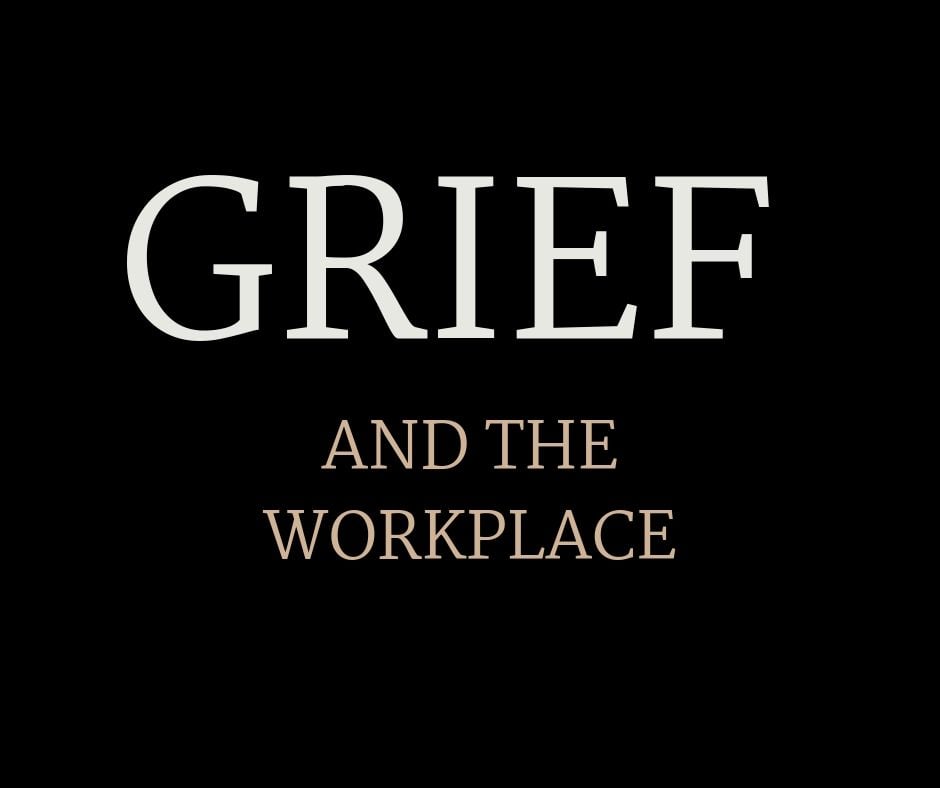 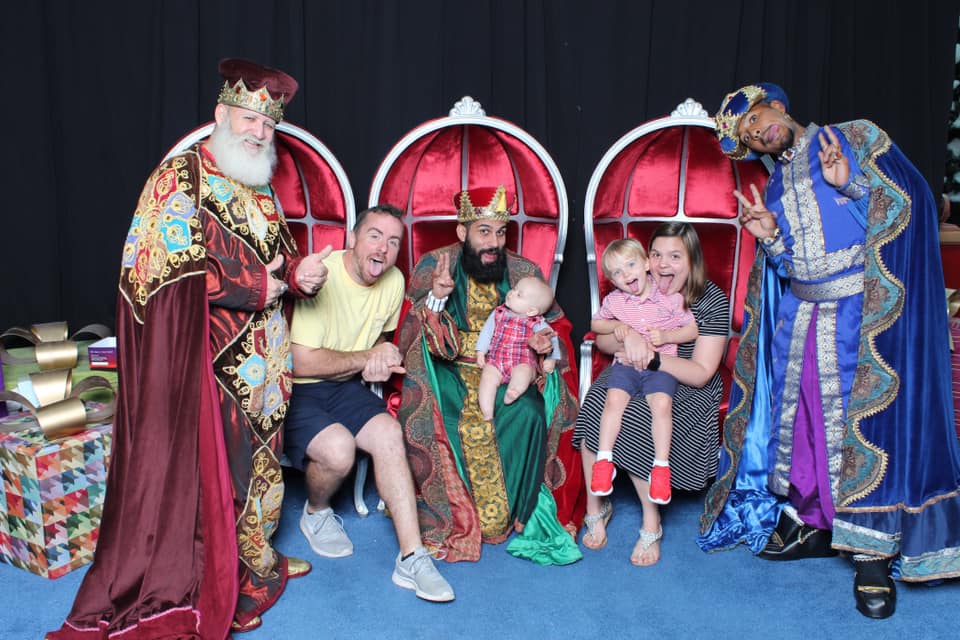 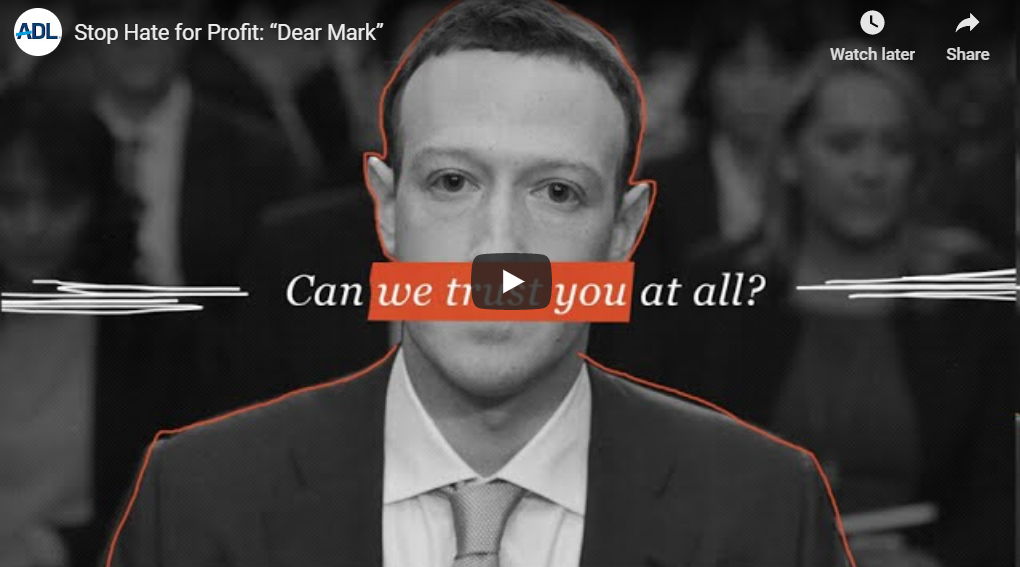 The #StopHateforProfit Facebook Boycott: What Do We Do Now?